With a lot of help from the Complete C# Unity Developer 2D course on Udemy.

So I totally forgot to DevLog this project.

I've decided I'm going to blast through these C# Unity Udemy course games as quickly as possible but changing them in weird and unnatural ways. It's only when I say, 'How can I add a countdown timer to this?', and then spend three hours working out the code and the implementation, that it beds down in my brainspace.

So this module in the course was about building a Number Wizard. You think of a number and the game will guess that number.

That was all well and good but I decided to turn it into a bomb code. And the computer needs to guess the bomb code before the time is up. If it fails... it will explode.

So far I've added tons of custom animation, some buttons, some exploding mechanics, and a tiny version of me called Duke Rondo. He's the guy who's going to die if he doesn't get the code before the timer runs out.

The thing I kinda hate about this game so far is the art, which is a hodgepodge of previously used images from old video projects and royalty free finds from across the web. I better learn how to do my own art if I'm going to make a good looking indie game in the future.

I went into my little garage workshop and I spent three hours I think, trying to implement a player input feature but whatever I did I could not get it to work. I was asking too much of myself from it. There were about three new programming concepts needed and I didn't know a single one.

So instead I made it randomly make the code but then I made it so that the Disarm button only appears when Duke's guess matches it.

I also made the bomb explode if the new minimum guess is greater than the code, because that would be impossible. Though I might remove that. I'm not sure yet.

I added some temp music and some more graphics and button noises.

I feel like it needs more movement on the screen.

This game is only ever going to be a small sketch of a thing. There's only a small amount of playability I believe.

I added some more little pieces to the game when I could and I got Jordan and Duncan to play it. The general consensus is that it's good but the UI is quite confusing on the main game so it needs to have some more thought put it into it.
So here's what I can do before I publish it tomorrow -- redesign UI, add my own music, and away we go.
I could do more but it's only a small sketch of a game. This ain't the next Halo.

In terms of future development, I could add levels, make the buttons move, maybe change the nature of the bomb. One is a countdown timer, the other one is sensitive to quick mouse movements, etc, add high scores.

I added some original music, might be one of my favourite parts of the whole design.

I also redesigned the UI so it makes a little more sense.

Hey! This is the second game I'm playing from you! This one is ok. I actually like the music and the art is humorous and I felt so pressured. It was fun! However the replayability is not really there sadly. :(    BUT the game has a certain charm, although I don't know what you'll be making next, I look forward to it. ;)

I know what you mean. This game has a playtime of about 1 minute at most.

ok this is weird, but i also liked how you used your "head" in the game. (get it?) Anyways, i really still look forward to your projects. i gave you a follow :D 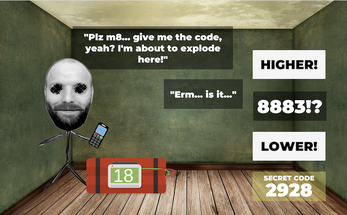 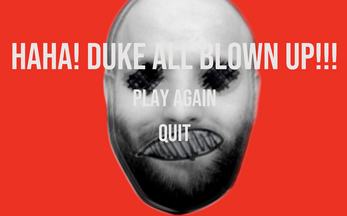